Documentation of Electrum Bitcoin Client (Focus on the GUI)

More documentation, especially with regard to command line parameters, can be found at the parent page of this Wiki, i.e. here.

Unless stated otherwise in particular sub-sections, the present state of this documentation is based on

As this documentation gets updated, this "version info" can be updated, too!

Later versions of Electrum may add new features or deviate from this description to some extend.

Discussions about unclear points should take place on the Discussion page.

What is a "Wallet" and a "Bitcoin Address"?

Your wallet is a list of Bitcoin addresses (more precisely: a list of privat/public key pairs). Each address "contains" (or is associated with) a certain amount of Bitcoins at a given time.

Your wallet consists of both normal addresses and change addresses. Although they are fully equivalent from the Bitcoin protocol's point of view, they are different in how they are used by Bitcoin clients like Electrum.

How are New "Normal Addresses" Created for my Wallet?

A Bitcoin client allows you to trigger the generation of a new Bitcoin address either manually, or it generates new addresses automatically upon certain conditions. The latter applies to Electrum: Depending on the "gap limit" setting in Electrum's program preferences, there will always be a certain number of unused addresses showing up in your list of receive addresses (=your own wallet's addresses), and as these addresses get used, new ones will show up automatically.

Typically you want to use a new address for receiving Bitcoins from somebody, instead of using any of your wallet's present addresses that have already been used for earlier transactions. This is to protect your privacy, because all Bitcoins transfers are published in the blockchain and can be read by anyone.

Another way of adding addresses to your wallet is to import private keys (with their addresses of course), using Electrum's command line options. See section about imported addresses for more details.

What is a "Change Address", and why is it useful?

The concept of change addresses is a feature not of the Bitcoin protocol, but of a Bitcoin client. It is implemented not only in Electrum but in most Bitcoin clients, including the original "Satoshi" Bitcoin client.

Whenever your Bitcoin client (e.g. Electrum) sends Bitcoins from your wallet's address "A" to a foreing address "B", a new change address "C" is created by Electrum and added to your wallet.

Exception: If all the Bitcoins of "A" are sent to "B", there is no need for creating a change address "C".

Actually, Bitcoin clients can also work without change addresses. In this case, the change would be sent back to "A" instead of the new address "C".

Why the concept of "change addresses" is useful:

Instead of generating new addresses in the default way from the wallet's seed, Electrum also allows you to import addresses (and their private keys of course) from external sources, e.g. from another Bitcoin client's wallet. For this, use Electrum's command line options. Note that imported addresses cannot be recovered from your wallet's seed and therefore need to be secured separately for a complete backup of your wallet.

Imported addresses can be used like any other normal receive address with Electrum for transmission or reception of Bitcoins, and can also be (un)tagged as "prioritized" or "frozen".

What is a "Deterministic Wallet" in Electrum?

Traditionally, all new addresses (incl. the private keys of course) added to the wallet (normal addresses or change addresses) are generated randomly. This is the case e.g. for the original "Satoshi Bitcoin Client" (at least as of today, version 0.6.2).

Contrary to that, a Bitcoin client with a "Deterministic Wallet" will generate all new addresses accoding to a pre-defined (i.e. "deterministic") algorithm as a function of a wallet-specific seed, which is a 128 bit number. This means, if the seed is known, all new addresses that Electrum will ever create for this wallet are known, because Electrum's algorithm is known (and open source). This is a big advantage when it comes to making wallet backups:

What is the "Seed" of a Deterministic Wallet in Electrum?

The Seed of a deterministic wallet is a series of 128 random bits in Electrum. For convenience, a seed can also be expressed by a sequence of 12 words in Electrum, and it also supports generation of a QR code to facilitate the backup of the seed.

What is the "Gap Limit"?

The gap limit is the maximal number of contiguous unused addresses in your deterministic sequence of addresses.

If you recover your wallet from seed, you will notice that the gap limit is asked by the recovery dialog. It is used in order to decide when to stop the recovery procedure.

If you need to have more receiving addresses in your wallet, you may increase your gap limit (expert mode). This, however, means that you will need to remember the new limit in order to be able to recover your wallet from seed.

More on the Electrum GUI

The "pay to" input line does not only accept bitcoin addresses. You may type a label from your list of contacts, or an alias.

Completions are available based on the labels of your addressbook.Example: 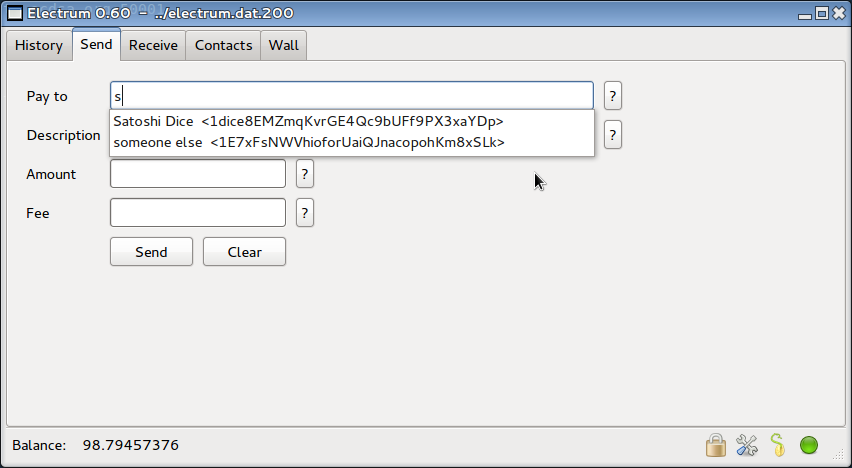 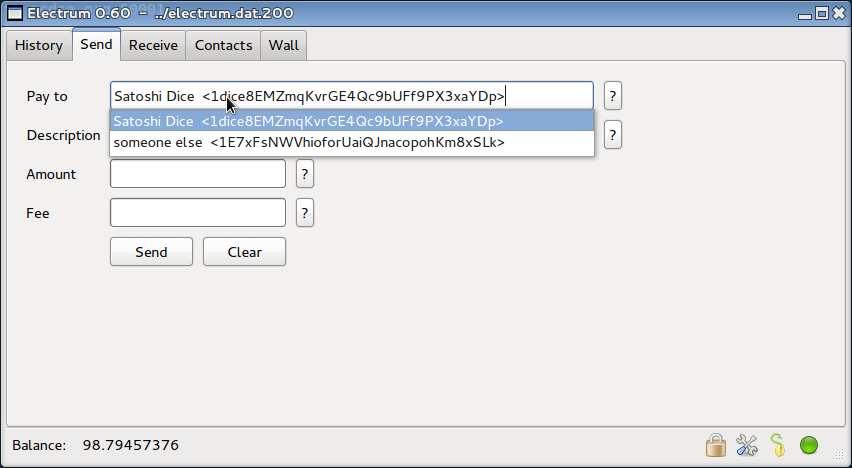 What does it mean to "Prioritize" or "Freeze" Addresses in Electrum?

When sending Bitcoins to a foreign address, Electrum will by default use a built-in method to select the address(es) of the wallet used for sending these Bitcoins.

The user can (de)prioritize or (un)freeze both normal and change addresses.

Note: Clearly, an address can not be "prioritized" and "frozen" at the same time.

What does the "Tx" column mean in Electrum?

The Tx column in Electrum displays a number for each Bitcoin address in the address list, both for own addresses ("Receive" tab) and for foreing addresses ("Contacts" tab).

In the "Receive" tab (own addresses):

The number in the Tx column indicates the total number of _incoming_ Bitcoin transactions that have ever been sent to this address.

In the "Contacts" tab (foreign addresses):

What does the "Balance" column mean in Electrum?

The balance column indicates the amount of Bitcoins belonging to the given address. The individual balances add up to the total balance of your wallet.

What does the "Flag" column mean in Electrum?

This column indicates certain properties of the different addresses:

Note: P and F flags can be applied to both normal and change addresses, and also to imported addresses.

What do colors mean?

In the Receive tab:

In the Contacts tab:

When you send a transaction, there is a delay before the Electrum client displays the transaction in its history. This is because the server polls bitcoind's memorypool every 10 seconds.

If you create another transaction during this interval, during which the first tx is not displayed, then your client will pick the same coins again, and the transaction will be rejected as a double spend.