A paper wallet is a mechanism for storing bitcoins offline as a physical document that can be secured like cash or anything else of real-world value. Paper wallets are generally created by printing a brand new public address and private key onto paper, and then sending bitcoins from a "live" wallet to the printed wallet's public address for safekeeping. If good security practices are followed, paper wallets are one of the safest means for storing Bitcoins.

Similarly, a mnemonic HD wallet seed may be written down on paper as a means of deriving keys from a single starting point. This allows a user to easily back up and restore a wallet without needing any other information.

Paper wallets are generally used with the goal of storing bitcoins offline in non-digital format to prevent unauthorized access. Using securely generated paper wallets properly will nullify the chances of your bitcoins being stolen by hackers or computer viruses.

They should not be confused with paper ECDSA private keys, which are a bad practice.[why?] 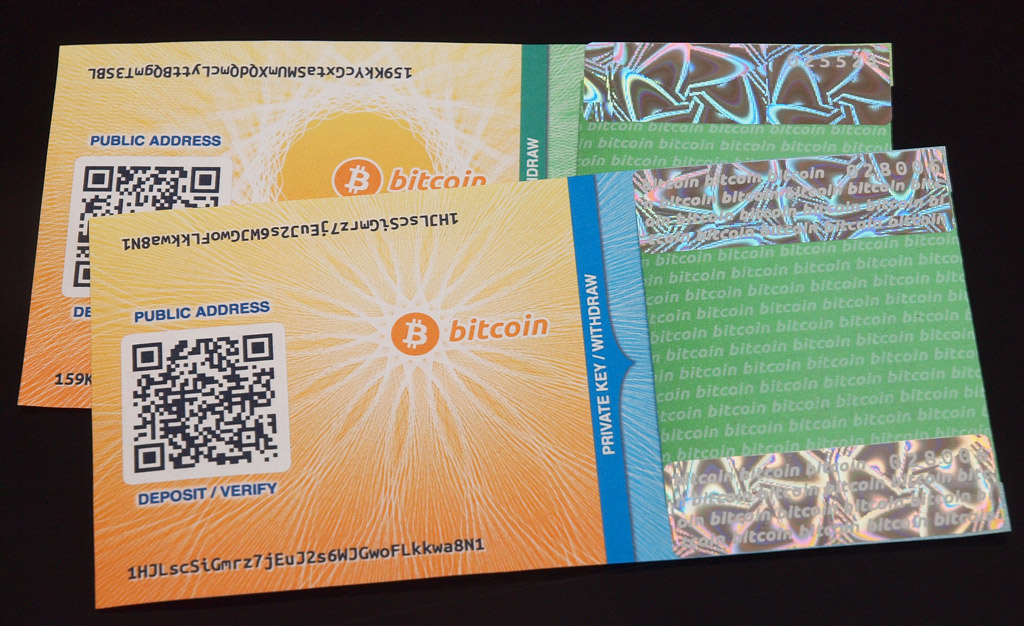 Paper wallets from bitcoinpaperwallet.com. Public key is visible, private key is hidden beneath folds and sealed with tamper-evident tape.

Care must be taken to securely generate paper wallets since an attacker can steal the present and future balance of a paper wallet if the private key is exposed, transmitted, or generated with insufficient entropy.

Some services distribute free open-source client-side paper wallet generators written in JavaScript, which can be used offline. Using these generators is relatively safe when the source code hash can be checked against the author's signature. It's advisable to use those services from a live bootable CD, to ensure that private keys are not compromised by spyware.

Currently, at least Armory and Electrum support generating mnemonic codes for their wallets, which can be written down or printed to make a paper wallet.

Currently, at least Armory and Electrum support generating mnemonic codes for their wallets, which can be written down or printed to make a paper wallet.

For the most security, it is advisable to generate your wallet from a live disc, to ensure that the private seed is not compromised by spyware. To generate a safer paper wallet in this way, first "clean-boot" your computer with a bootable CD (such as a Linux Live CD) while disconnected from the Internet. Download a verified version of your preferred wallet software, and disconnect the computer from the internet. Print your paper wallets or store them on external media (do not save them on the computer), and then shut down the computer. You may need to load an appropriate printer driver in order to print while booted from the live CD.

The problem with printing out secure documents—even if your computer is 100% virus/trojan free—is that your printer driver and/or operating system may be keeping copies of the documents you print in a "spool" or print queue. If a hacker or virus gets into your computer and knows to look for these cache files, then they can get your private keys and sweep your paper wallets. Precautions to mitigate this type of attack include:

Using a very basic printer is advisable since high-end office printers may have WiFi or internal storage that keeps a cache of printed documents.

This is a risk if someone gets access to your printer, or if you dispose of your printer. There is also the possibility that a smart enough printer can be hacked. (Consider StuxNet which was able to rewrite the firmware of non-computer devices indirectly connected to the Internet) If this concerns you, use a "dumb" printer, and never let your printer have access to the Internet or to an Internet-connected computer.

Paper wallets are very different from "live" wallets such as the Bitcoin-QT client in that it is not possible to transfer (withdraw) a portion of a paper wallet's bitcoin balance. The only way to withdraw funds from a paper wallet is to import or "sweep" the entire balance of the paper wallet to a new address, typically a live wallet or online exchange. Once the transfer has been confirmed, the paper wallet should no longer be used.[4]

There are various methods for copying the private key data from a paper wallet to other wallets. bitcoind supports an "importprivkey" RPC method for this purpose. Bitcoin-Qt's debug console can also be used in a similar way (see also how to import private keys v7+). BlockChain.info and Armory can also import them directly into wallets.