When a miner creates a block proposal, the miner is entitled to specify where all the fees paid by the transactions in that block proposal should be sent. If the proposal results in a valid block that becomes a part of the best block chain, the fee income will be sent to the specified recipient. If a valid block does not collect all available fees, the amount not collected is permanently destroyed; this has happened on more than 1,000 occasions from 2011 to 2017,[1][2] with decreasing frequency over time.

However, Bitcoin blocks are not produced on a fixed schedule—the system targets an average of one block every 10 minutes over long periods of time but, over short periods of time, a new block can arrive in less than a second or more than an hour after the previous block. As the number of blocks received in a period of time varies, so does the effective maximum block size. For example, in the illustration below we see the average time between blocks based on the time they were received by a node during a one-day period (left axis) and the corresponding effective maximum block size implied by that block production rate (right axis, in million vbytes):

Bitcoin transactions vary in size for a variety of reasons. We can easily visualize that by drawing four transactions side-by-side based on their size (length) with each of our examples larger than the previous one: 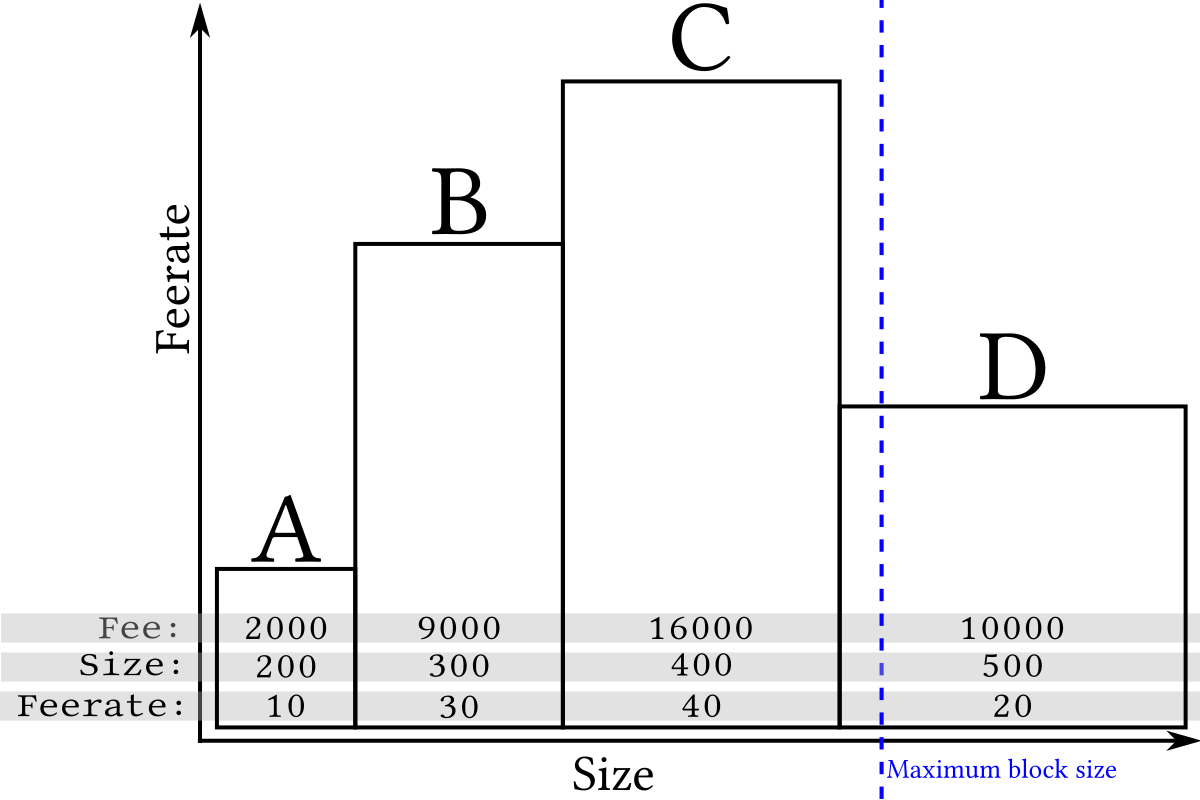 Although long (wide) transactions may contain more total fees, the high-feerate (tall) transactions are the most profitable to mine because their area is greatest compared to the amount of space (length) they take up in a block. For example, compare transaction B to transaction D in the illustration above. This means that miners attempting to maximize fee income can get good results by simply sorting by fee rate and including as many transactions as possible in a block: 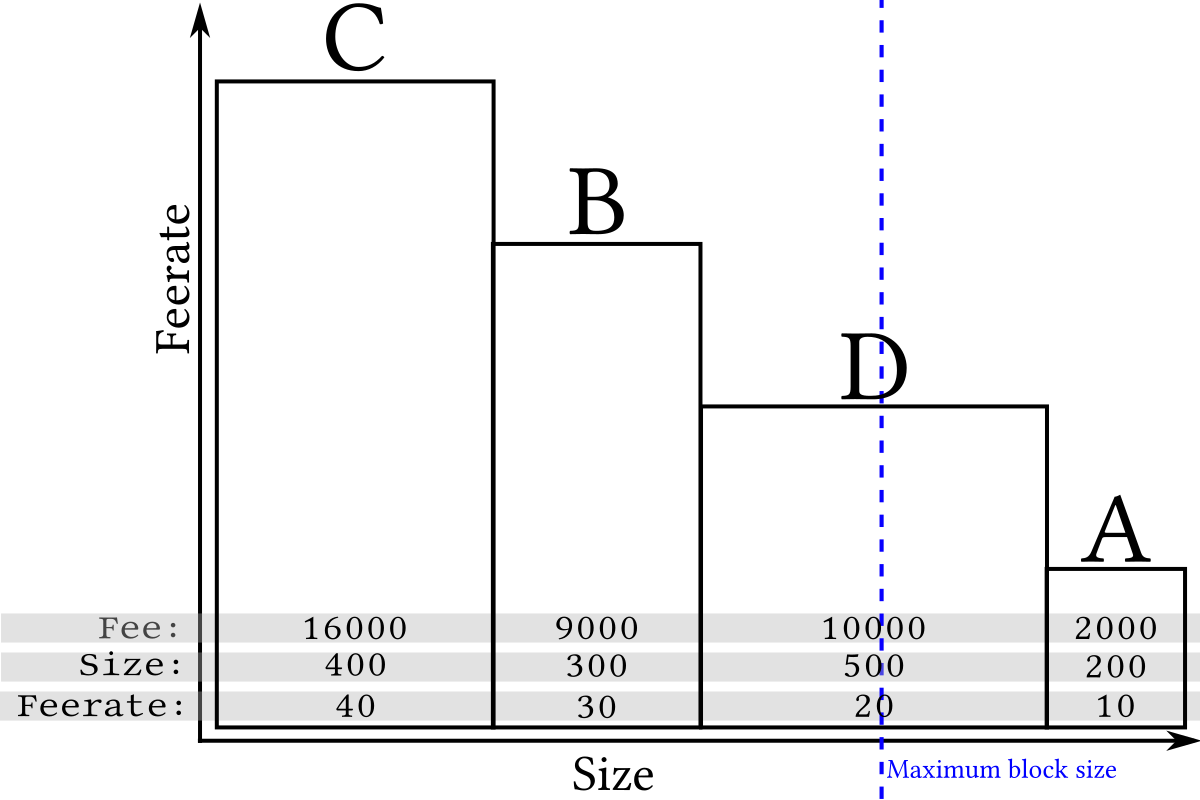 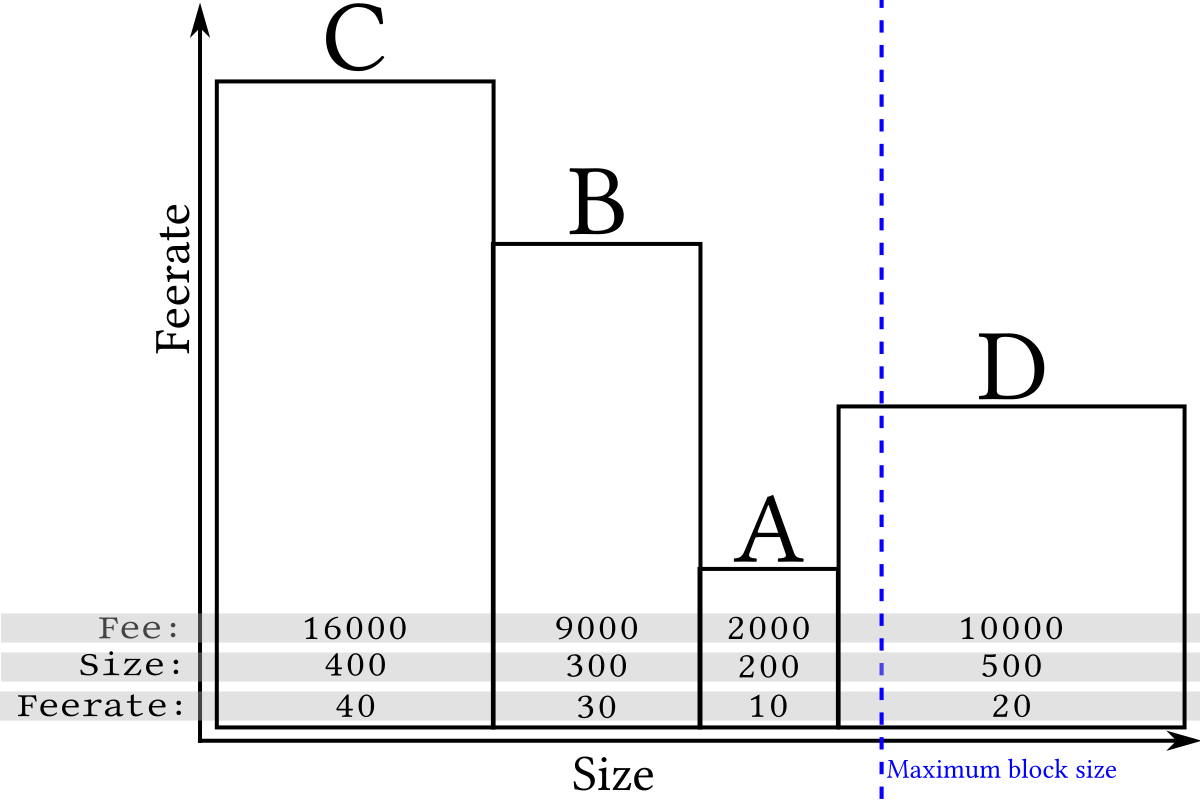 Transactions needed to have a priority above 57,600,000 to avoid the enforced limit (as of client version 0.3.21). This threshold was written in the code as COIN * 144 / 250, suggesting that the threshold represents a one-day old, 1 btc coin (144 is the expected number of blocks per day) and a transaction size of 250 bytes.